Skip to content
Home/Display 101, Products/Bad pixels explained – the bright pixel and the dead pixel dots on screen
Previous Next

When we talk about Dead Pixels, we do not mean the mildly popular British sitcom about three friends fixated on a fictitious online role-playing game. We mean pixel dots on screen of an LCD that are not working properly: failing to reproduce the correct light levels.

Let’s start with the basics. On a standard TFT display one pixel consists of three sub-pixels: red, green, and blue. When for some reason one of those sub-pixels is stuck in the wrong position it starts blocking the light from passing through that layer. A small dark dot appears on the screen – that’s the bad pixel (or dead pixel). However, when the entire pixel is stuck in the wrong position opposing to the one above, then all light can pass through that layer and it creates a white, bright pixel on screen. This we call a bright pixel (or lit bad pixel). There are several types of that bright pixel. You might see  little pixel dots on screen, that are either red, green, or blue. It depends on which sub-pixel happens to be stuck permanently, letting the light through. While there are more scenarios where a pixel can be faulty and become bright pixel, these three summarize the most common situations pretty well. 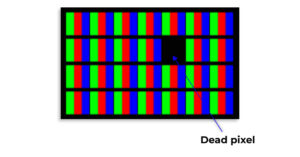 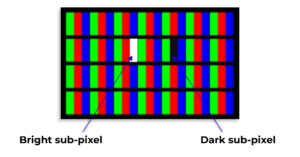 We created a simple test that lets you check your screen for bad pixels. Click the button below to run it. How it works? It lights up the entire screen in one of the five colors concerned. This way you can spot tiny pixel dots on the screen and if some are different, it becomes apparent. This is how technicians sometimes fix the problem of bad pixels. By switching all those colors on your screen you are resetting the stuck crystals. Another method would be to apply slight pressure on the bad pixel. All you need to do is:

If not all bad pixels are completely dead, then hopefully it could put them back in the right position.

Displays consist of various layers and one of which is glass. Glass comes from TFT factories in large sheets, called mother glass, and is sorted by grades or classes. These classes are set in the ISO-9241-3xx series of standards, which describes three levels of the acceptable number of defects.

The table below shows the maximum number of bad pixels allowed in each class:

The accepted number of bright pixels is lower because they shine. And a shiny bright pixel on screen is much more visible.  Dark pixels are more acceptable simply because they are black and less visible.

In practice, when you order a certain number of displays, some will have those defects while the majority will be defect-free. The exact percentage depends on the class agreed upon. The amount of wrong pixel dots on screen varies among each manufacturer, but usually it is rather small. Lots of bad pixels are rare. Riverdi’s displays have practically no bad pixels as we test them all. We had no such cases. Even so, in our 10.1” displays we perform an extra layer of tests as standard. So in the end we will not miss a single item with a bad pixel. We guarantee 100% ZERO bad pixels.